Artificial grass or turf is a surface manufactured from synthetic fibers made to look like natural grass. It is most often used in arenas for sports that were originally or are normally played on grass. However, it is now being used on residential lawns and commercial applications as well.

The main reason is maintenance - artificial grass standing up to heavy use, such as in sports, and requires no irrigation or trimming. Domed, covered, and partially covered stadiums may require artificial grass or turf because of the difficulty of getting grass enough sunlight to stay healthy. But artificial grass does have its downside: limited life, periodic cleaning requirements, petroleum use, toxic chemicals from infill and some heightened health and safety concerns with children.

Fake grass first gained substantial attention in the 1960s, when it was used in the newly constructed Astrodome in Huston, Texas. The specific product used was called AstroTurf; this term since then became a colloquialism for any synthetic grass or turf throughout the late 20th century (although the term, along with the original AstroTurf, is now mostly obsolete, having been replaced by more modern turfs such as Nomow artificial grass). 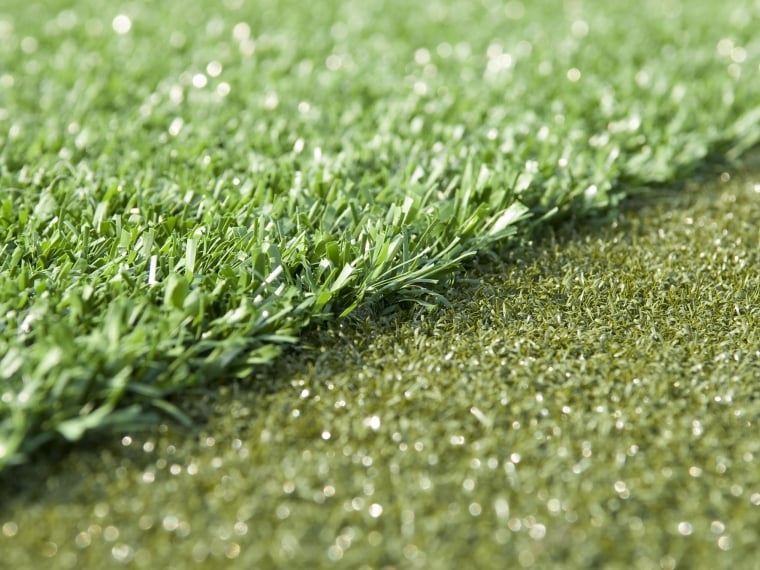 Artificial Grass Originated in the 60's

Artificial grass/turf gained substantial attention in the 1960's when it was used in the newly constructed Astrodome in Houston, Texas.

David Chaney – the Dean of the North Carolina State University College of Textiles – headed the team of Research Triangle Park researchers who created the first notable artificial turf. That accomplishment led Sports Illustrated to declare Chaney as the man "responsible for indoor major league baseball and millions of welcome mats."

Artificial grass first came to prominence in 1966, when AstroTurf was installed in the Astrodome in Houston, Texas. The state-of-the-art indoor stadium had attempted to use natural grass during its initial season in 1965, but this failed miserably and the field conditions were grossly inadequate during the second half of the season, with the dead grass painted green. Due to a limited supply of the new artificial grass, only the infield was installed before the Houston Astros' home opener in April 1966, the outfield was installed in early summer during an extended Astros road trip and first used after the All-Star Break in July.

The use of artificial turf and similar surfaces became widespread in the U.S. and Canada in the early 1970s, installed in both indoor and outdoor stadiums used for baseball and American football. Maintaining a grass playing surface indoors, while technically possible, is prohibitively expensive. Teams who chose to play on artificial surfaces outdoors did so because of the reduced maintenance cost, especially in colder climates with urban multi-purpose "cookie cutter" stadiums such as Cincinnati's Riverfront Stadium, Pittsburgh's Three Rivers Stadium and Philadelphia's Veterans Stadium.

Artificial turf was first used in Major League Baseball in the Houston Astrodome in 1966, replacing the grass field used when the stadium opened a year earlier.

Even though the grass was specifically bred for indoor use, the dome's semi-transparent Lucite ceiling panels, which had been painted white to cut down on glare which bothered the players, did not pass enough sunlight to support the grass. For most of the 1965 season, the Astros played on green-painted dirt and dead grass.

The solution was to install a new type of fake grass on the field, ChemGrass, which became known as AstroTurf. Because the supply of AstroTurf was still low, only a limited amount was available for the first home game. There wasn't enough for the entire outfield, but there was enough to cover the traditional grass portion of the infield. The outfield remained painted dirt until after the All-Star Break. The team was sent on an extended road trip before the break, and on 16 July 1966, the installation of the outfield portion of AstroTurf was completed. Groundskeepers dressed as astronauts kept the turf clean with vacuum cleaners between innings.

Artificial grass was later installed in other new "cookie-cutter" stadiums such as Pittsburgh's Three Rivers Stadium, Philadelphia's Veterans Stadium, and Cincinnati's Riverfront Stadium. Early AstroTurf baseball fields used the traditional all-dirt path, but in the early 1970s, teams began using the "base cutout" layout on the diamond, with the only dirt being on the pitcher's mound, batter's circle, and in a "sliding box" around each base. With this layout, a painted arc would indicate where the edge of the outfield grass would normally be, to assist fielders in positioning themselves properly.

The biggest difference in play on artificial grass was that the ball bounced higher than on real grass, and also traveled faster, causing infielders to play farther back than they would normally, so that they would have sufficient time to react. The ball also had a truer bounce than on grass, so that on long throws fielders could deliberately bounce the ball in front of the player they were throwing to, with the certainty that it would travel in a straight line and not be deflected to the right or left. In 1969, Franklin Field, the gridiron stadium of the University of Pennsylvania, Philadelphia, Pennsylvania, switched from grass to artificial turf.

Also home of the Philadelphia Eagles, it was the first National Football League stadium to use artificial turf.

Also home of the Philadelphia Eagles, it was the first National Football League stadium to use artificial turf. In 2006, Gillette Stadium, the football stadium of the New England Patriots and the New England Revolution, switched from grass to artificial grass due to the conflict of poor weather and hosting many sporting and musical events at the stadium.

It is one of 13 National Football League stadiums that have turf instead of grass fields; the Patriots, Giants and Jets (who share a stadium) and Bengals actually switched from AstroTurf to natural grass before reverting to a next-generation artificial surface.

All eight stadiums in the Canadian Football League currently use artificial grass, due to that country's northern climate. Since the early 1990s, the use of synthetic grass has moved rapidly beyond sports/athletic fields to residential and commercial landscaping, particularly in more arid regions.

This trend has been driven by the dramatic improvement in the quality and variety of available synthetic and artificial grasses, the reduced cost of maintenance and care compared to natural grass, and the realisation that artificial lawns can be a significant water conservation measure in areas where water usage is a concern.