The Olympic Stadium will be transformed into the “British countryside” for the opening ceremony of the London 2012 Games on 27 July.

A cast of 10,000 volunteers will help recreate country scenes, against a backdrop featuring farmyard animals and landmarks like Glastonbury Tor.

The opening scene of the £27m ceremony will be called “Green and Pleasant”, artistic director Danny Boyle revealed.

He added the show would create “a picture of ourselves as a nation.”

The Olympics have been a long awaited event for Britain and it is set to be one of the best yet. The opening ceremony will kickon what is said to be the biggest event of the year! it will turn heads and show the rest of the world what we have to offer. The Olympics will top off a wonderful year along with the Queens Jubilee and continue Britains Patriotic streak! 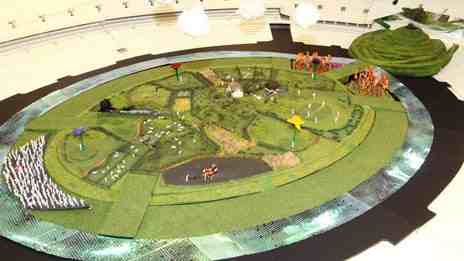