As Wimbledon kick starts this week; the big question is – is the grass real or fake? Is it too good to be true? The answer is no, the grass is 100% real turf but it isn’t any normal turf.

To ensure that the players can perform to the best of their ability – there is a huge focus on the height and density of the grass used on the courts which isn’t an easy job. There’s a total of 18 courts at Wimbledon that are used for the championships, along with a number of practice grass courts. To look after this high number of courts there is 16 permanent ground staff – with an additional 12 extra staff during the Wimbledon Championships.

The grass is 100% Perennial Ryegrass which is believed to have improved durability and strength to survive the wear and tear of the game. It is kept at a height of 8mm and is cut every day to ensure this is maintained during the championships.

But it isn’t just the grass that takes a lot of maintenance – the soil also needs a lot of attention in order for it to be at its optimum condition. As you can probably guess, the way the ball bounces is determined by how hard the soil is. The courts are rolled and covered to ensure they are kept dry and firm and will allow around 13 days of play on them without causing damage to the sub-surface.

If you don’t want the upkeep and attention needed to maintain a Wimbledon standard tennis court – we can help. We have a variety of sports surfaces that are perfect for tennis courts so if you’ve been inspired by Wimbledon – get in touch! 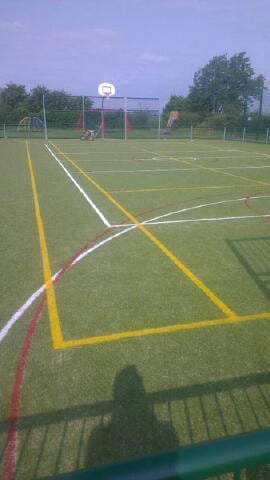