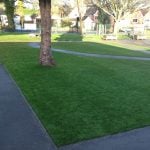 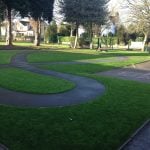 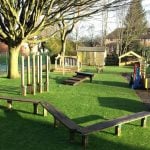 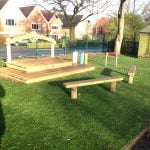 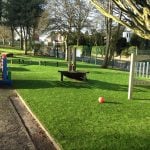 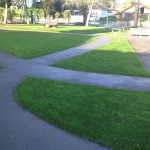 After years of struggling to maintain the natural grass in their large play area and having a smaller area of neddlepunch surfacing that just hadn’t worked for them i the long term, Four Oaks Primary in Sutton Coldfield decided to bring in Nomow to make the change to Artificial Grass for their playground.

Having received quotes from numerous other companies and deciding on Nomow after seeing the superiority of the product range and competitive prices, with the installation planned to be carried out over two stages.

Using Play 365, which has been specifically designed by Nomow for areas being used by children such as schools and nurseries or public childrens play area, Nomow provided the initial site survey and plans for the installation, carrying out all work to the highest specification. The total area of artificial grass now covers over 900m2, working around paths, trees and play equipment and giving the children at Four Oaks a beautiful green play area that can be used 365 days a year!