Wyvil Primary School and Resource Bases for Speech, Language and Communication Needs, and Autism in London, is an award winning educational facility which is currently undergoing a number of refurbishment projects. The school educates over 500 pupils aged 3 to 11 and had made the decision recently to improve and renovate a Multi Use Games Area (MUGA) in the school. 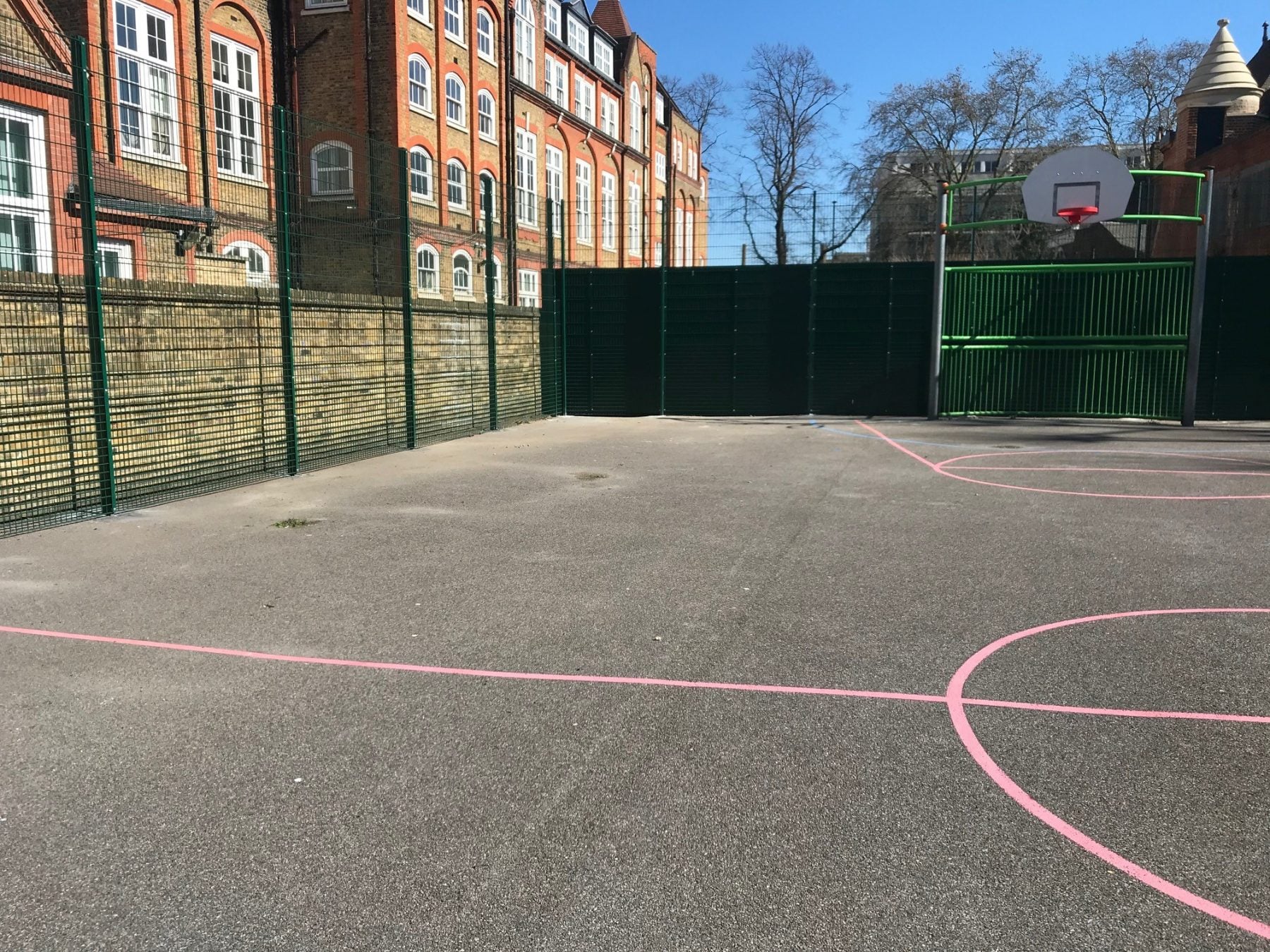 The MUGA had a Tarmac surface which had seen a lot of wear and tear over the years. This had resulted in an uneven playing area that was fairly lumpy in certain parts. On top of this, the area had poor drainage and so large puddles often appeared which were very undesirable for sporting matches.

Before any artificial grass could be installed, the whole area needed reworking. Nomow set to work patch Tarmacing the surface and repairing any holes or highly worn areas. Resurfacing and artificial grass alone is often not enough to resolve drainage problems in the long term. Although all Nomow Artificial Grass includes drainage holes and is therefore fully porous, if the area as a whole doesn’t drain properly, drainage problems will persist into the future. So in addition to the general resurfacing, Nomow installed ACO drainage hidden underneath the sports pitch. This ACO drainage will deal with the water properly in transporting it efficiently away from the playing surface. 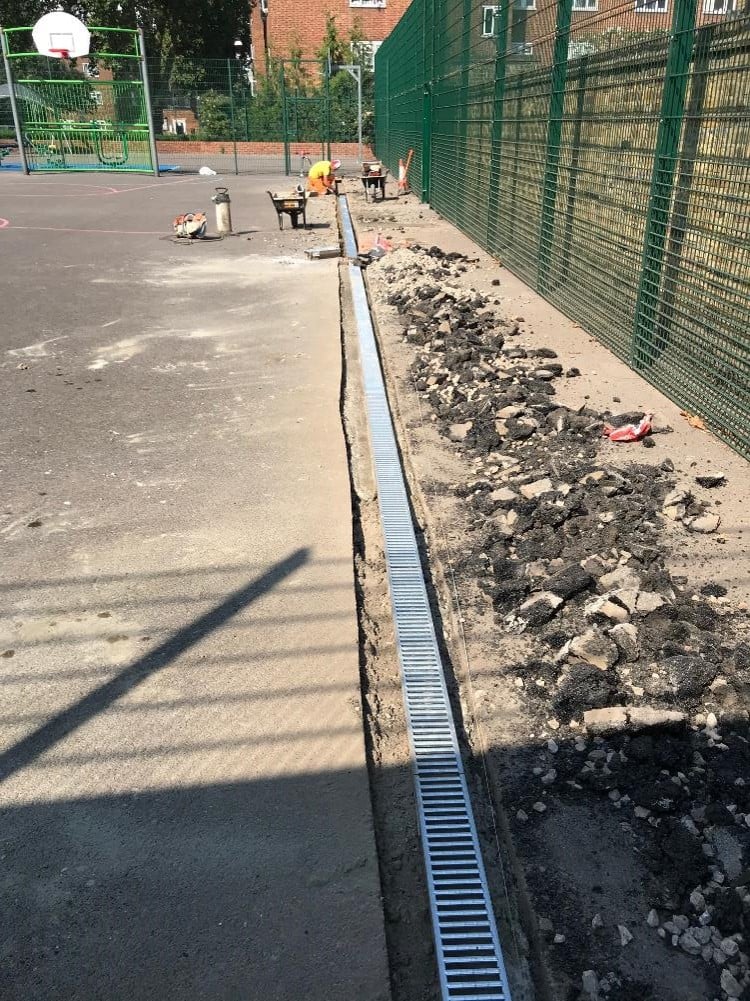 Once the heavy groundwork had been completed, installation of the actual playing surface could begin. A 10mm Nomowflex Shock Pad underlay was installed first. This shock pad will act as an extra cushioning layer and soften any falls during a football match. 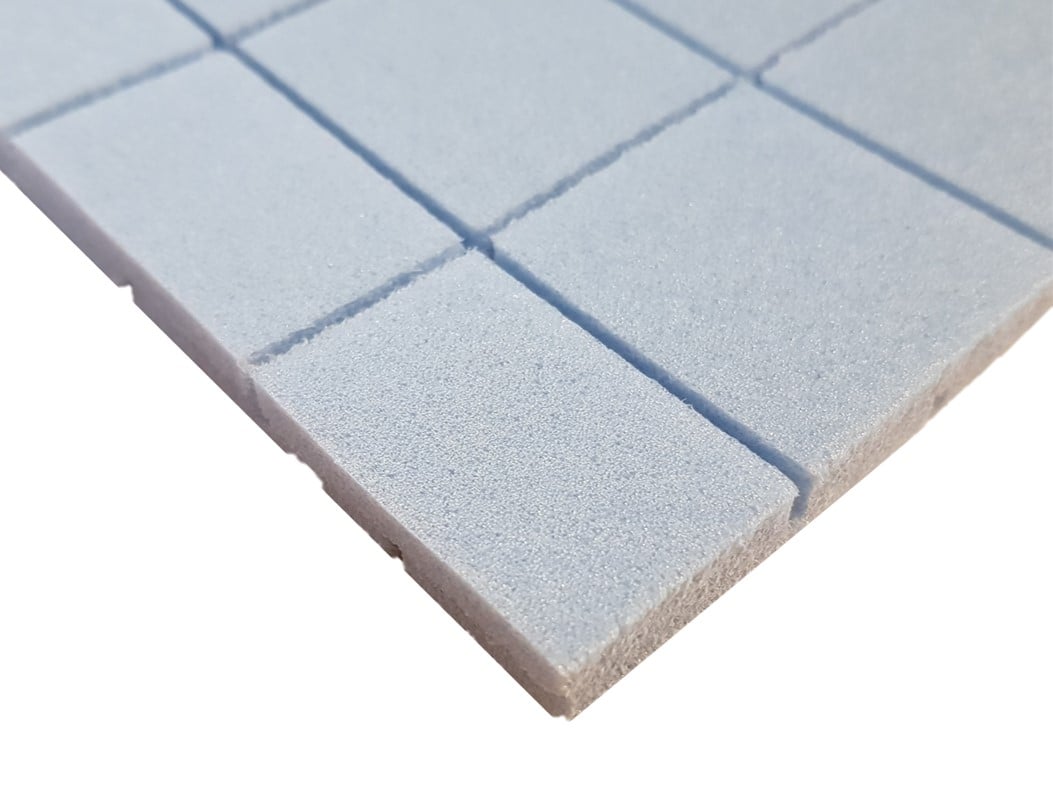 The actual artificial grass was our Stadia 24 product which is effectively a 4G pitch, in that it is an advancement on the technologies used in 3G pitches. Unlike 3G pitches which use a rubber crumb in-fill, Stadia 24 uses a secondary curled monofilament layer as support for the grass and to create realistic bouncing. This means that Stadia 24 will have lower maintenance costs in the long run and will benefit players using the surface, as they won’t have to deal with things like ‘sand splash’. 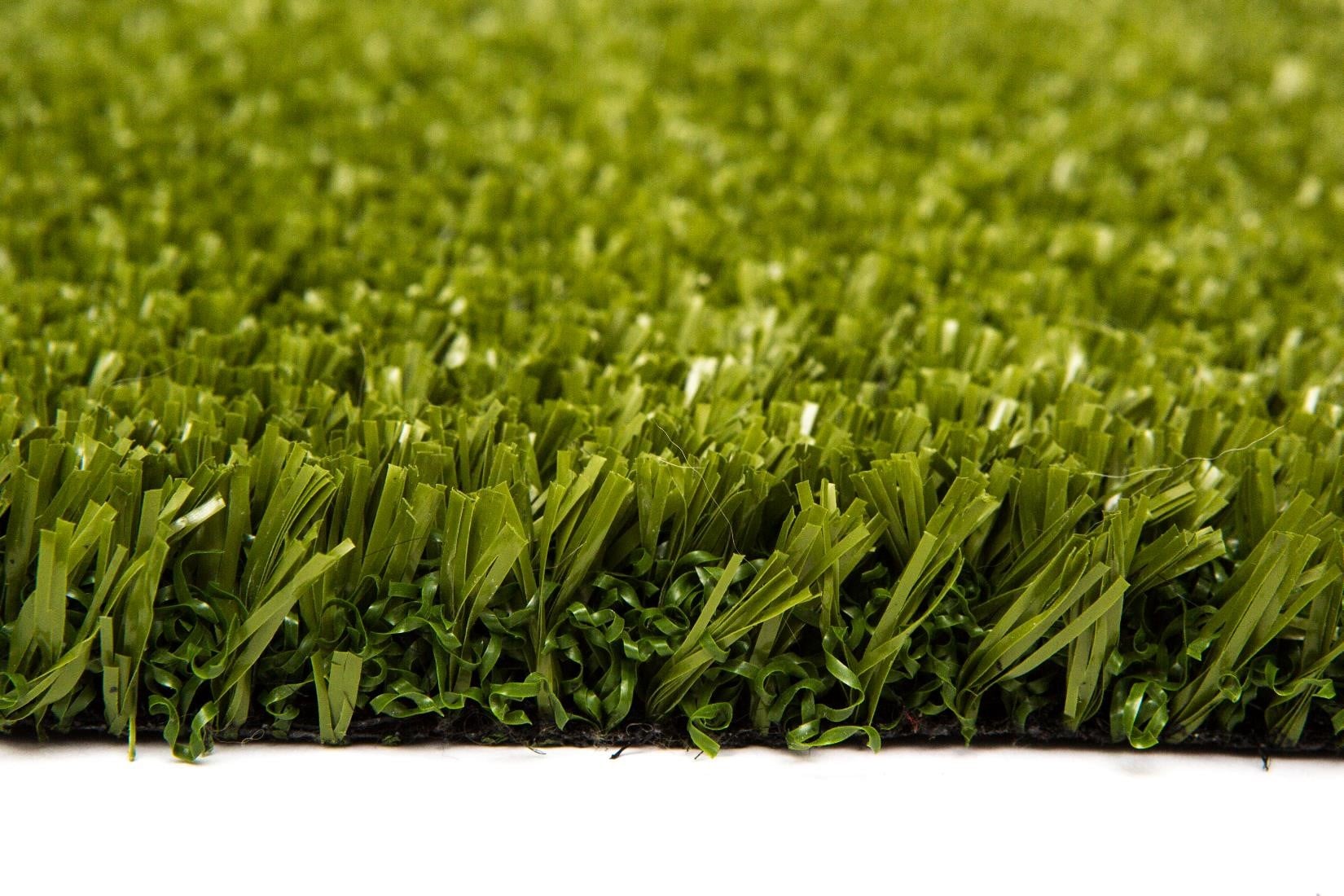 The pitch also included Stadia 24 white lines, which will serve as permanent markers on the MUGA. As well as straight white lines, the pitch also included curved white lines which are notoriously difficult to install. Every metre of curvature requires precision cutting by our expert installers. The curved lines are then laid down piece by piece and connected together and to the rest of the artificial grass, using joining tape and high strength adhesive.

After all of our hard work, Nomow and Wyvil primary school were very pleased with the final result. The 360m2 area had been transformed into a state of the art, high performance, beautiful looking sports facility. The artificial grass will protect the Tarmac, the ACO drainage will help move rain water away from the area and the Stadia 24 artificial grass will provide a cushioned, high quality and exemplary playing surface for the children at Wyvil Primary school. 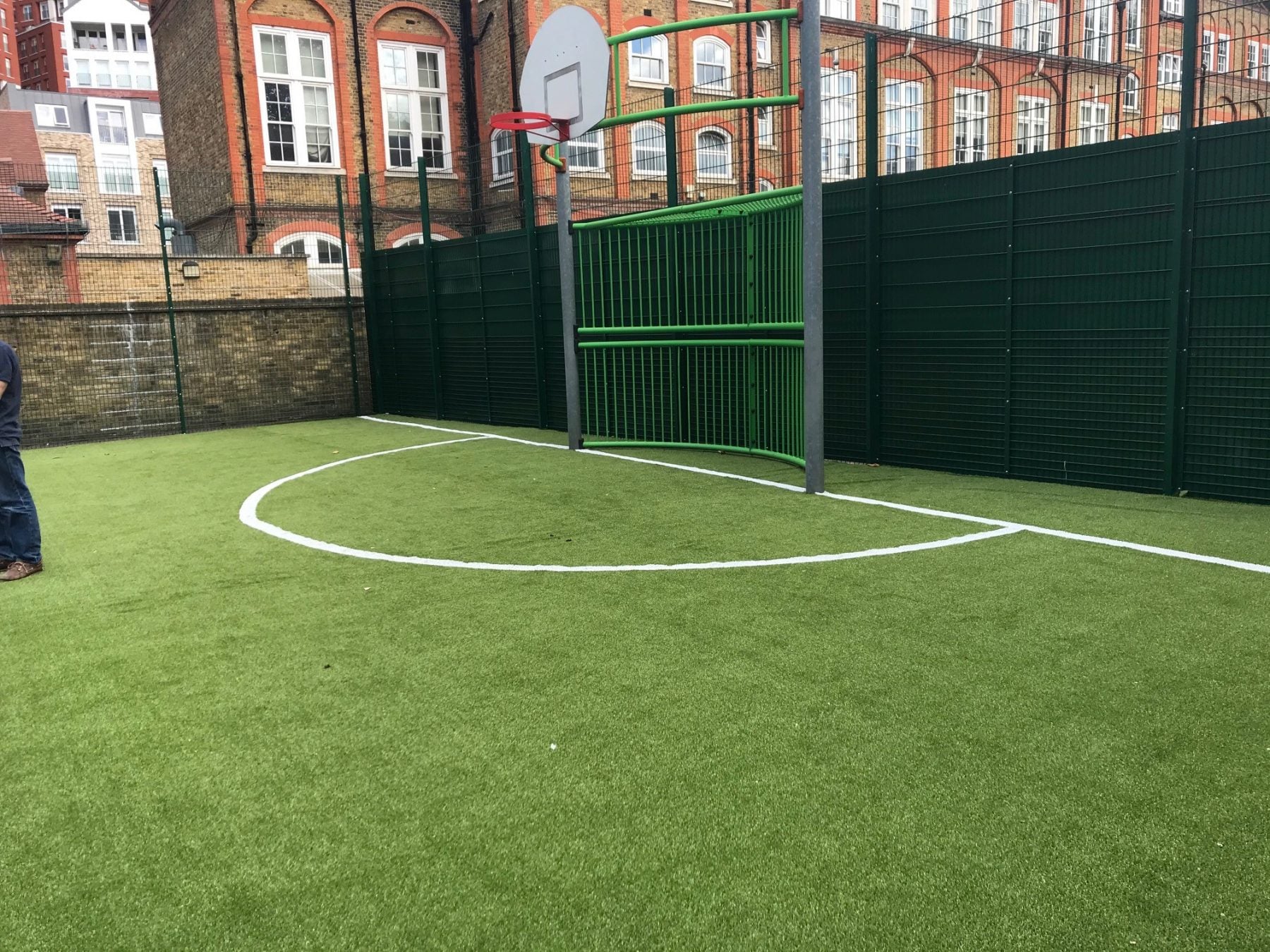 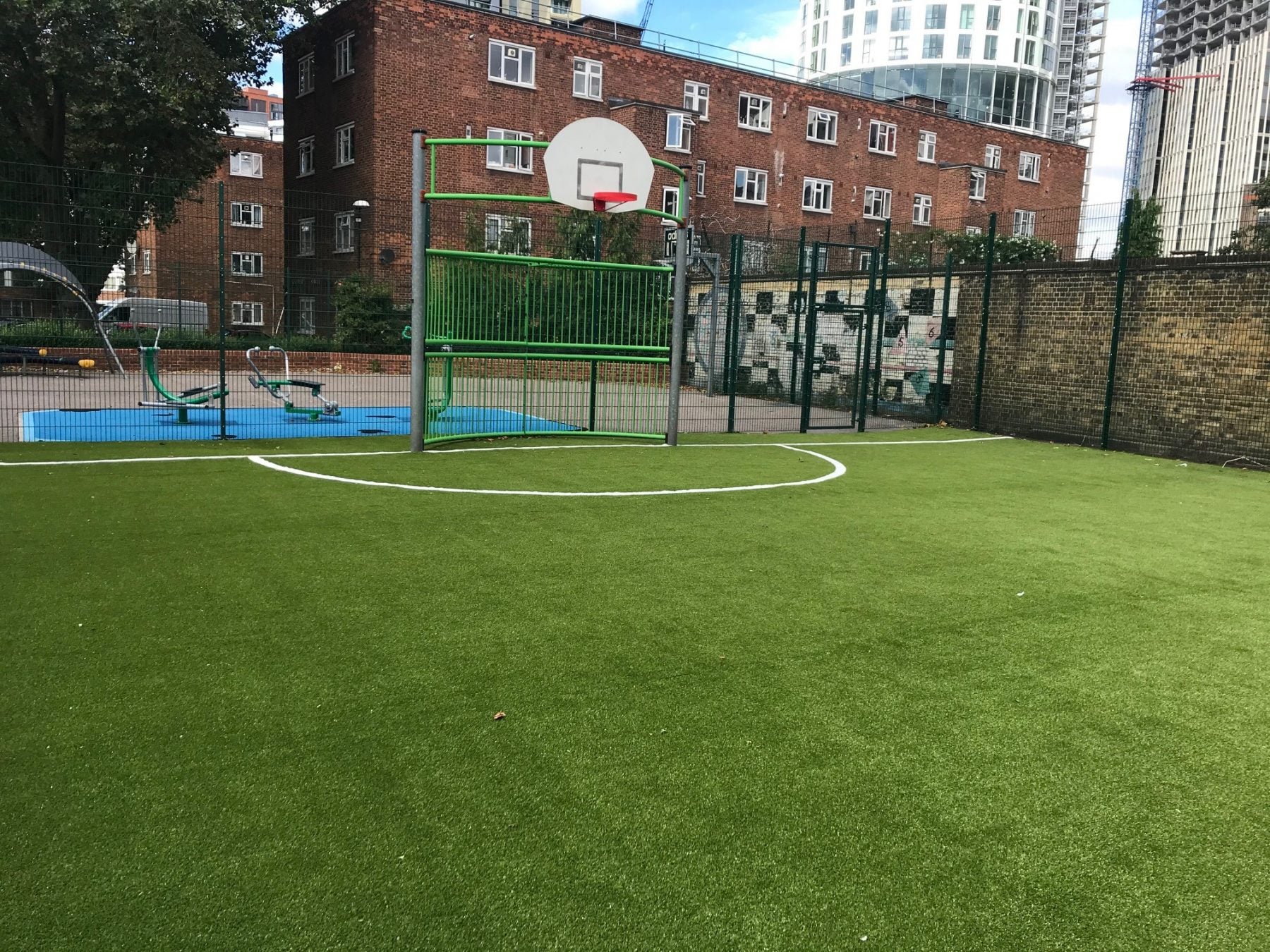